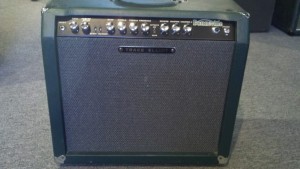 James Horrocks is the bass player in the Lol Goodman Band a top class blues band that can be seen at blues venues and festivals around the UK. He called in with a Trace Elliot Boneville C50 1×12 lead combo. It was sounding rubbish, kept cutting out and the reverb was weak and had a hiss. It needed a new pair of EL34 output tubes and some fresh resistors in the reverb circuit. I have never encountered one of these before. It is unusual in that it has two foot switchable channels but volume level is the only parameter you can set independently. The GAIN control and PREAMP STYLE are common to both. Also, it has an FX loop switch on the front panel that cuts off the guitar signal completely when the rear FX LOOP switch is set to SERIES. I thought this was a fault at first but when I looked at the circuit, it was designed this way. The FX OFF switch works as expected when the rear switch is in PARALLEL mode. Despite it’s quirks, it sounds and looks good, especially if you’re into motorbikes. Like the green tolex too.