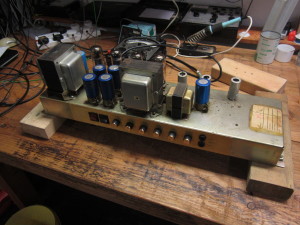 Amplifier valves (or tubes) age with use. Under an average gigging guitarist’s use they will last between 6 months and a year before they start to tire. Worn out valves exhibit the any of the following symptoms:

The output valve bias current is the steady current flowing through each of the output valves when there is no input signal. It’s purpose is to make the valves work in the most undistorted portion of their range (if that is what is desired). No two valves that come off the production line are ever exactly the same. Output valves are tested and matched in pairs and quads so that their bias currents and other behaviours are roughly the same. When a new set of valves is plugged into an amp, it is usually necessary to adjust the bias current setting. As your valves age, it may need to be readjusted. Some valve stage amps do not have a bias current adjuster. The manufacturers supply their own valves that are selected to work in their amps (Mesa Boogie for example). Most small practice amps under 30 Watts have automatic bias adjustment built in to the design.

It is always a good idea to let an amplifier cool down for 10 or twenty minutes before manhandling it back into the van.

Castors on a valve amp are not a good idea. Dragging your second favourite piece of equipment (second only to your genitals) over a rough floor shakes and rattles your tubes. Better to carry by hand or get a pallet truck with some fat bouncy tyres.